You will soon be able to see some of the more ghastly prison artifacts in Arkansas — thanks to the sale of birdhouses made by Arkansas prisoners. 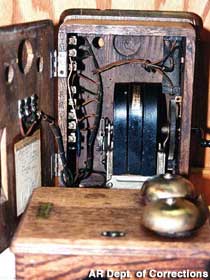 That’s the upshot of a bill that was recently passed by an Arkansas Senate panel, which will allow the prisoner birdhouses to be sold in the gift shop of the Old State House Museum in Little Rock. Amy Peck, PR person for the museum, said that the birdhouses are “a groundbreaking product for our store.”

The exhibit being sponsored, Badges, Bandits, and Bars: Arkansas Law and Justice, opens April 24 and is scheduled to run through the end of 2010, and possibly longer. Among the usual photos, uniforms, guns, and badges that are often found in police and prison memorabilia, the exhibit includes:

“It’s kind of maniacal,” Amy said of the old-fashioned crank telephone. For years it was used at the Tucker prison farm, where unfortunate prisoners were strapped to a table and had sensitive parts of their bodies wired to it. “When it rang, there would be a shock.” 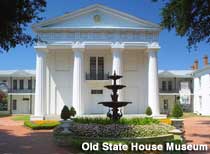 We had to ask Amy:  would the electric chairs be open to visitors as photo-ops, or  have gag buzzers attached to them (as we’ve experienced elsewhere)? She said no.

“We are an accredited museum and so we have certain types of museum practices that we have to follow,” Amy said. “We’re trying not to sensationalize it,” although she conceded that, “We do know that people turn out in droves for that kind of thing.”

So, sorry — no prank calls on the Tucker Telephone.