The Bonnie and Clyde Ambush Museum in Gibsland, Louisiana, has lost its Bonnie and Clyde “death car” that was shot up in the 1967 Warren Beatty/Faye Dunaway movie. Owner Ken Holmes leased the car to the National Museum of Crime and Punishment in Washington, DC, where it will be an attraction for years to come. 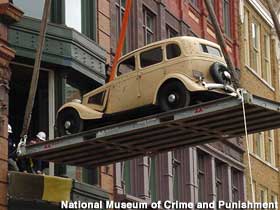 “We literally built the museum around the car,” said NMCP chief operating officer Janine Vaccarello, explaining that the Museum had to knock out a wall and hoist the car in with a crane. “It’s not going anywhere,” she said. Ken Holmes recounted the deal for us: ” I kept telling them no and no and no and their offer kept going up and up and up. I just had to do it. It’s making more money for us up there than it would be sitting in our museum.”

Holmes said that the space formerly occupied by the car in the Gibsland museum would be filled with new exhibits such as the brooch that Bonnie was wearing when she was killed. But he recognizes that a death car is an important exhibit, and told us that he was pursuing several options to replace it:

In other news, the Bonnie and Clyde Ambush Museum still has for sale a few swatches of Clyde Barrow’s death pants. Ken Holmes notes, however, that “we’re runnin’ low.”

More on The Crime Museum