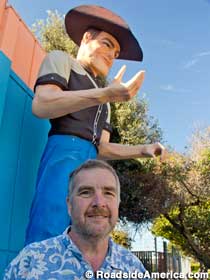 “The problem is that it doesn’t fit in his hands… you’d have to break the thumb off,” laments Bruce Kennedy, as we ponder his wondrous and mysterious giant ax.

The wall-mounted prop is a tool denied its intended grip in the hands of a 20-ft. tall fiberglass statue named “Big Mike,” a Bunyan-style Muffler Man.

Bruce is a collector of unique sculptures, and he also owns a fabrication business. We’re thrilled about that, because he found space on his Hayward, California property to install Big Mike and another Muffler Man in 2013.

And he wants more. 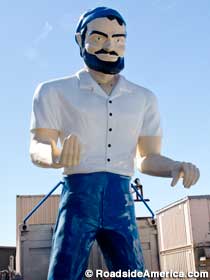 Big Mike had been an unofficial landmark in Hayward — one of the first generation of Muffler Men, dating from around 1966, and had been used to advertise a succession of businesses along Mission Avenue. By 2011, the last business had closed, the Muffler Man disappeared, and local citizens panicked.

Uh, the panic part may be just in our own heads…but they noticed he was gone.

Hayward-without-Big-Mike was only a temporary calamity. In early 2013 the bearded giant was back, now in the fenced yard of Bell Plastics. And by late summer 2013 another Muffler Man, a cowboy, had been installed at the same location.

Bruce read about the cowboy on RoadsideAmerica.com — an owner in Missouri had it in storage for over ten years, for a purpose never fulfilled, and was ready to release it back into the general population.

Bruce paid for the figure and the hefty transport costs cross-country, only to discover on arrival the statue was in extremely poor condition.

“There were spider web cracks all over the fiberglass,” he said, and crushed sections. Twelve years in storage had not been kind to the retired gunslinger.

But Bruce was already committed to repairing and refurbishing the statue for public display. The restoration was executed by a fiberglass artisan who normally does Christmas and holiday work, so an off-season project was ideal for his schedule and Bruce’s budget.

The fiberglass repair was followed by a complete paint makeover. Muffler Men are often displayed with rudimentary painted eyes and lips, and perhaps some cheek rouge, but Bruce thinks his artist brought it to a whole new level. The cowboy has intricate facial features and fancy western duds, including snaps and buttons.

Conspicuously, the two giants have not been erected side-by-side. “We’re close to San Francisco,” Bruce said, with all that may or may not imply.

Chiefly though, Bruce prefers to avoid raising the temperature of any civic entities which might regard his little/big hobby unfavorably. For example, he’s commissioned an excellent horned demon skull to substitute for Big Mike’s head. Visitors will see it throughout the month of October. However, it’s not illuminated at night. Best to stay on the correct side of that line between landmark and eyesore… 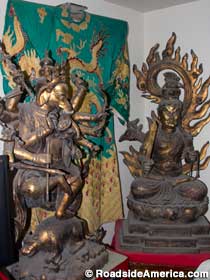 Bruce collects other things, chiefly discovered via eBay. Scattered around his offices are plexiglass display cases containing oriental art and sculptures. His personal office is a clutter of papers and interesting figurines. An 8-ft. tall fiberglass Indian warrior stands in the entrance room to Bruce’s offices. It’s a new acquisition, purchased on eBay from a seller in San Diego. He showed us an accessory bear tooth necklace and knife that will eventually be attached. For now, it just dominates the room, in front of the ax. 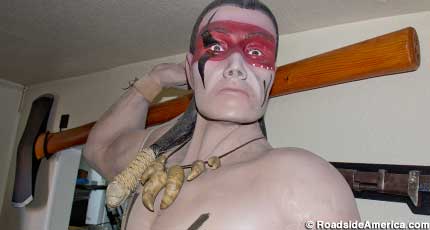 The ax was not an eBay purchase — it was actually an anonymous donation. A story in the paper informed locals about Big Mike’s whereabouts, and one morning soon after Bruce noticed a big package leaning on the fence in the bushes. There was a note: “For Big Mike.” The package contained an ax with a wood handle and fake ax head. “B.M.” was carved into the handle heel.

Bruce still has no idea about the identity of Big Mike’s mystery benefactor.

2020 National Ave., Hayward, CA
Directions:
Bell Plastics. In an industrial park. I-880/Nimitz Fwy exit 28. Drive west on Winton Ave. for one mile. At the stoplight, turn left onto Clawiter Rd, then make first right onto National Ave. Drive a quarter-mile. You'll see a blue building on the left; Big Mike is in the alley next to it.
Admission:
Free
RA Rates:
Major Fun