Fans of the film A Christmas Story have had only one place to go for year-round pilgrimages: the house seen in the movie, which is in Cleveland, Ohio (There’s also this unintentional tribute). However, the town where the events in the film really took place was Hammond, Indiana. It felt overlooked. It wanted its share of an enduring holiday touchstone. 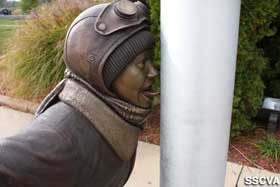 Hammond has a guy who knows a good idea can grab you and not let go. That guy is Bill Wellman, and that idea is a bronze boy with his tongue stuck to a flag pole.

Bill was born in 1923, has an unlimited amount of pep, and would be roughly the same age as the film’s protagonist Ralphie (maybe a few years older). He’s also vice-chairman of the Hammond-area visitors bureau. When the 30th anniversary of the film arrived in 2013 he told his younger board members, “We need a photo op.”

It was unveiled on October 29: a life-size bronze statue of a scene in the film where Flick, Ralphie’s friend, gets his tongue stuck to a frozen flagpole at Warren G. Harding Elementary School, the result of a “triple dog dare.” 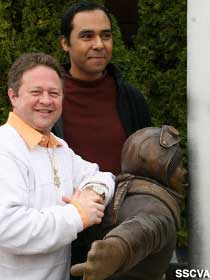 On hand for the unveiling outside of Hammond’s Indiana Welcome Center was the actor who played Flick, Scott Schwartz, and the statue’s sculptor, Oscar Leon. The statue was revealed by dignitaries (including Bill) using crowbars to pry open a crate stenciled “Fragile” and then pulling out handfuls of straw, familiar references to anyone who’s seen the film.

All of this, said Bill, was part of his goal to “make it about show business.” Bill, whose father in 1948 opened a Western-themed bar in Indiana by riding a horse into it, was raised to appreciate the value of showmanship. Bill was part of the team that brought The John Dillinger Museum to the same Welcome Center. And in 2012 Bill convinced the town of Valparaiso, Indiana — where he lives — to install a statue of Orville Redenbacher, its hometown popcorn king.

“I told our young mayor, ‘What we need is a photo op,'” said Bill, who cited a study that showed that Orville was “95 percent recognizable, just like Colonel Sanders in his prime.” Bill also said that corporate giant ConAgra Foods granted permission for the statue only on the condition that it contain no references to popcorn. “They said we could have Orville, but we couldn’t have popcorn,” said Bill. “I’m not sure what their logic was, but we got a first class statue!” 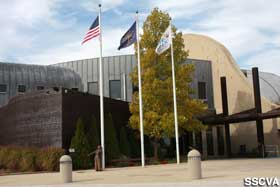 For the new statue in Hammond, Bill said he knew from the start that Flick had to be its subject. “It’s gotta be Flick and it’s gotta be first class,” Bill said he told his fellow board members (Hammond made certain to use the same artist who had sculpted Orville).

Although Bill himself has never stuck his tongue to a flagpole (“I was smart enough to know better”) he knew of many boys who had.

Which raises the question: what about people visiting the statue? Hammond does have cold winters and the flagpole is made of real metal (The one used in the film was stick-resistant plastic). Bill said he has encouraged the Welcome Center to post a sign, “If You Lick You Will Stick,” or at least to attach a piece of wood to the pole so that visitors who dare to imitate Flick will leave with their skin intact.

(Bureau spokeswoman Nicki Mackowski-Gladstone told us that Hammond will do what it can to discourage creating a saliva-centric attraction such as The Gum Wall of Seattle.)

And what of the real flagpole and Warren G. Harding Elementary School? They’re both long gone, but true fans can visit the empty lot where they stood — it’s only 2.5 miles northeast of the Flick statue, on the north side of Cleveland Street just west of Parrish Ave. Bill said that there’s no historical marker at the site, but Hammond was thinking of making one.

7770 Corinne Drive, Hammond, IN
Directions:
I-80/94 exit 3 (Kennedy Ave.). Drive south and make an immediate right onto Corinne Drive. The statue is in front of the Indiana Welcome Center; Flick is stuck to the pole flying the American flag.
Hours:
Statue is outside; Welcome Center is open daily 8-5 (Call to verify) Local health policies may affect hours and access.
Phone:
219-989-7979
Admission:
Free
RA Rates:
Worth a Detour

One Response to “Flick’s Lick: Triple Dog Dare for Hammond, IN”