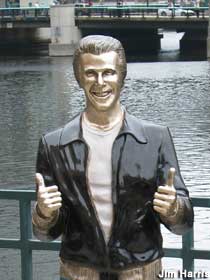 After three proposed locations and several production delays, a life-sized bronze statue of Arthur Fonzarelli, from the TV show “Happy Days,” was unveiled in the Brew City on August 19. Milwaukee was the fictional location for the 1970s take on the 1950s, and the “Fonz” was role model for a generation of retro cool rebels (at least, until he jumped that shark).

America, the non-broadcast version, already has several bronze tributes to its beloved TV show characters, including Ralph Kramden and Hoss Cartwright. Most of these were erected by the TV Land channel to promote shows that they happened to be airing. Bronze Fonz, however, is the product of pure local civic adoration. And a call by us to TV Land last month confirmed that the channel wasn’t planning to erect any more statues anyway.

The statue has received mixed reviews from the locals, with some people unsettled by Fonzie’s squinty, toothy grin and his turquoise jeans. We think that his metal face is perfectly appropriate, and we applaud any production process that can make bronze seem blue, as well as giving the Fonz a black jacket and a white t-shirt. We wish that all bronze statues had colorized clothes; it would make them a lot easier to see in souvenir snapshots.

One Response to “Bronze Fonz Says “Aaaay!” To Milwaukee”