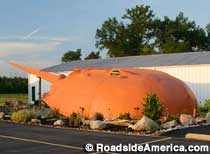 The date: August 30. The place: the parking lot next to Freedom Worship Baptist Church in Blanchester, Ohio. The you-don’t-want-to-miss-this event: Evel Knievel’s former bodyguard jumping the World’s Largest Horseshoe Crab on a motorcycle, then crashing through the burning Gates of Hell!

We were in Blanchestor earlier this month. The Church’s pastor, Jim Rankin, told us that its annual “Crabfest” was originally planned as a mostly musical festival. Then he received a call from Gene Sullivan, who tours the world with his Jump For Jesus show. Gene, who is 60 years old, offered to jump the Crab and crash through a burning wall as a way to attract crowds of people who normally wouldn’t go to church. Pastor Rankin loved the idea, and the Church quickly paved its parking lot so that Gene would have enough room to accelerate onto the ramp and over the Crab.

It will be a tricky jump. The Crab is 30 feet long, and its 25-foot-long spiky, upraised tail is an additional dangerous obstacle that Gene will have to avoid. Once he knocks down the Gates of Hell, Gene will have only a few feet to stop or else he will plow into the tomb of Jesus, which the Church has built in its back yard.

But Gene has been performing variations of this stunt for 30 years, and Pastor Rankin has a lot of faith in the born-again daredevil. “The police are gonna close down the highway so that Gene has more room,” he told us. “TBN is going to cover it. It’ll be great.” 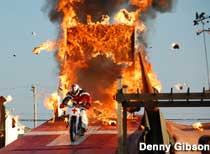 Update – Sept. 2008: Gene made the jump successfully, crashing through the Gates of Hell without harm!

Hwy 124, Hillsboro, OH
Directions:
One mile east of downtown Hillsboro, on the south side of Hwy 124.
Admission:
Free
RA Rates:
Worth a Detour

One Response to “Daredevil To Jump World’s Largest Christian Crab”