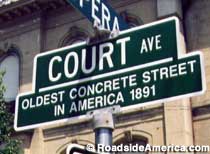 For the past few years, the town of Bellefontaine, Ohio, has done the right thing: they’ve reopened the America’s Oldest Concrete Street to traffic.

But now that giddy thrill may be ending.

During the 1990s the town blocked off Court Ave. in a Nervous Nelly effort to keep it exactly as it was — in the 1990s. The street had been patched many times since it was laid in 1891, but the thinking was to preserve whatever remained. That didn’t work very well, according to an article in the Columbus Dispatch. The street became “a haven for skateboarders,” and the wear and tear evidently continued. Now it’s in bad shape, and the town has $215,000 to fix it, and a decision must be made once it’s repaired: reopen it to cars, or geld it again to a pedestrian mall.

We say that streets are meant for driving. Build a skate park for the punks, and give the street to the adults. If that requires speed restrictions, so be it. It’s not too much to ask for a little respect when you drive your car across something that’s 117 years old.