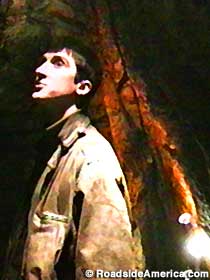 Poll Question: Which of these show cave tour elements is most appealing to you?

The vacation landscape can change all it wants, but show caves — those walk-thru subterranean passages with the artificial lights and slippery handrails — will always be with us. Enterprising cave owners were charging admission for lantern and candle tours over 150 years ago, and the tradition continues. Cave tours have evolved, and not always in a good way, from our perspective. So we polled site visitors about what is most appealing from a short list of successful commercial cave attributes.

Human skeleton on display: Only 10% of respondents thought this was the most appealing cave tour element. Not a big shock — skeletons as a tourist draw have diminished in recent decades. After the Indian remains repatriations from tourist attractions — including caves — the skeleton action shifted over to medical exhibits like the Mutter Museum. And the Body Worlds plastinated corpse-o-ramas have desensitized the public to human remains.

Colorful lighting, dramatic sound FX: A key feature of privately owned show caves was traditionally their deployment of garish colored lights and rock formations that quote the Bible. Yet this cave feature only garnered 12% of responses. Maybe it’s an expected part of the experience? Or do cave visitors really seek out more naturally presented environments?

Flashlight, helmets required: Next in popularity at 18%, the “wild” cave tour has its enthusiastic supporters. Keep in mind that a flashlight and helmet doesn’t make you a spelunker; for that you must add knee pads, a carbide lamp, and underwear full of mud. Cave mud.

Tour by tram or boat: The lazy person’s favorite, but also rare enough to make an otherwise dull series of cave rooms more interesting. Fantastic Caverns offers an all-jeep tram tour, and Penn’s Cave navigates the inky depths with their all-water tour. 24% of respondents, not all lazy per se, picked this one.

Guide who’s a little crazy: The winner in this poll, at 34% (and our pick, too). Over a third of you want a guide with that demented sparkle in his or her eyes, spouting wild tales, jokes and corny pranks. But maybe not a total wacko. During the Moment of Total Darkness, the guide might goose you, but probably won’t stick a knife in your eye….