Early 2008 was bad for Gatlinburg, Tennessee. Long-time attraction Christus Gardens closed. The property was sold to a condo developer. Everything in the attraction — the murals, the wax dummies, the famous marble face of Jesus with-the-eyes-that-followed-you, even the name “Christus Gardens” — had been sold to an outside Christian group. Rumors had them moving it somewhere else, possibly to a place like The Holy Land Experience in Orlando, Florida.

Then the economy tanked. 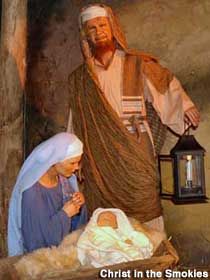 The exhibits of Christus Gardens still sit in a warehouse, somewhere. But the property in Gatlinburg, befitting a Christian attraction, has been reborn.

The Christus Gardens building has been leased to several of its old employees, and is now reopened as Christ in the Smokies Museum and Gardens. If it seems remarkably similar to Christus Gardens, it’s because the building was designed to hold a Christus Gardens-like attraction. Wax dioramas once again recreate the life of Jesus, accompanied by prerecorded narration and angelic music. According to director Joe Waggoner, the scene of Jesus’s ascension to heaven now “has movement in it,” and efforts have been made to bring the wax figures out to where visitors can almost touch them.

Almost, but not quite. The idea that any Christian attraction would allow you to drape your arm around Moses or Judas, or make Mary Magdalene blush, a la Madame Tussauds, is unlikely.

Waggoner told us that the museum is working hard to create new, improved versions of many of the old Christus Gardens exhibits. The “one thing that people really remember,” he said, was Christus Gardens’ marble face of Jesus, with its mysterious moving eyes. If attendance is good this year, he suggested, the new museum might have the funds to commission “a similar piece.”

And it was only possible because of a lousy economy. We mentioned that to Waggoner, and he agreed that, “There was a kind of blessing there in disguise.”

More on Christ in the Smokies Museum and Gardens