The Urge To Burj

Burj Dubai, the world’s tallest building, is set to open to the public on December 2, 2009. This titan of towers is the centerpiece of a 20 billion dollar development project that is bizarrely ambitious and ostentatious even by Dubai standards. Other record-setting features of this enormous undertaking include Dubai Mall (“the world’s largest shopping and entertainment destination”) and the Dubai Fountain (“the world’s tallest performing fountain”). There will also be an Old Town (which is new, of course) and a 14,000 car parking facility. 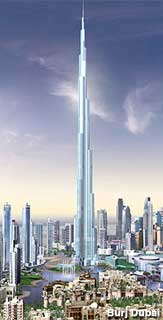 Could it be that the U.S. has permanently opted out of the global skyscraper race (after all, our national ambivalence about tall buildings is entirely understandable post-9/11). Have we ceded the field to upstarts like the United Arab Emirates, China and Malaysia?

We at RoadsideAmerica.com scoff at the idea. For although we may come up short on the basis of feet and inches — we also scoff at such un-American units of measurement as the kilometer! — in this country we know how to have fun with our skyscrapers!

Sure, Burj Dubai will have an observation deck on the 124st floor. But will it have THRILL RIDES!!! like Las Vegas’ Stratosphere Tower? Will you be able to hang out over the edge of Burj Dubai in a contraption that resembles four claws of a giant robotic lizard? We think not!

Burj Dubai plans to offer non-scintillating interactive exhibits such as “Dubai: Then and Now” and “Burj Dubai Among The Greats”, but we think that the popularity of Chicago’s Willis Tower attraction “The Ledge” proves definitively that tourists prefer the heart-palpitation thrills of a claustrophobic, high altitude, tempered glass box to educational Dubai-boosterism of a multi-media nature.

Not only that, but Burj Dubai’s extensive fact sheet conspicuously lacks any mention of the most essential of high-altitude amenities: a tacky revolving restaurant that serves $35 eggplant parmesan and makes you feel rather nauseated when you try to wobble your way to the restroom after a few drinks.

This is all pure speculation, of course.  Maybe Burj Dubai will be great fun. After all, the “virtual time-travel” telescopes do sound cool.

Anyway, we still have the World’s Tallest Totem Pole and the World’s Largest Thermometer (which we assume is also the World’s Tallest). Not to mention the Wonder Tower, where you can (possibly) see six states and visit an eight-footed pig upon descent. It’s high time you check it out! [Post by Anne D. Bernstein]

Sections: Coming Soon, Rants, WorldTourWatch Comments Off on The Urge To Burj