Do you enjoy peering over railings? Do you like to feel gusts of unobstructed wind shoving you toward doom’s abyss? 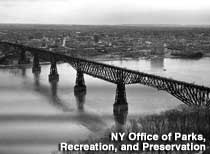 Foreign countries may have the tallest observation decks, but America has moved beyond cheap thrills — or at least it expects to get them through the windows of something more exotic than a building.

Better yet, let’s have no windows at all. Let’s have it so that we can walk out over the precipice, not just gawk at it from a skyscraper.

The World’s Highest and Longest Pedestrian Bridge satisfies those urges. It follows a trail blazed by Arizona’s successful Skywalk and Kentucky’s unsuccessful Purple People Bridge (unsuccessful for reasons other than the bridge). It puts you into the void.

Officially titled Walkway Over the Hudson, it’s a smooth concrete sidewalk laid atop a rusty, 120-year-old railroad trestle. It’s 1.25 miles long, and most of that length is spent 212 feet above the Hudson River. Walkers and runners are welcome, bicyclists and roller-bladers as well. Skateboards are banned, although we presume it’s for philosophical reasons rather than for any deficiencies in locomotion.

But who needs wheels, anyway? Just strolling across the Hudson River gorge during a howling snowstorm should be excellent exercise, as well as an exercise in terror.

One Response to “Walking Tall: Latest In Lofty Thrills”