A second casting of J. Seward Johnson’s undeniably eye-catching 4,100-pound struggling sculpture, “The Awakening,” has been permanently installed in a grassy expanse in Chesterfield, Missouri. The grasping giant was added to Chesterfield Arts’ public art collection and will be available for perpetual public gaping and climbing, forever frozen in an angry state, quite annoyed at being awakened from its underground nap. 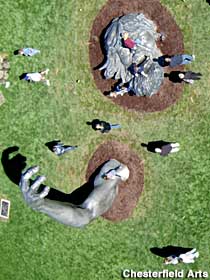 The October 10th unveiling featured drumming and a T-shirt contest. For the event, children were encouraged to swarm all over the powerfully built yet helpless metal man (but let’s just see what happens when some reckless child takes a fall from a finger, or some frat guy jokester gets his butt stuck in its gaping jaw). J. Seward Johnson made it to the event in person; he also appears in two promotional videos, where he stated that the work “has a place in the universal subconscious” but also admitted that “God only knows what this means.”

Regular Roadside readers may recall the ongoing saga of the original version of “The Awakening”, which spent 27 years attempting to emerge from the earth at Hains Point in Washington, DC. Then, in 2007, it was sold to developer Milton V. Peterson for $750,000. The heavy duty cast aluminum body parts were dug up, hoisted onto three flat-bed trucks, and driven to their new home: a man-made beach within the appropriately huge 4-billion-dollar mixed-use waterfront development at National Harbor in Maryland.

It seems that developers just love Johnson’s work, which combines the caché of fine art collecting with a populist Neat-O Factor. The Chesterfield acquisition was commissioned by Louis Sachs and will serve as the centerpiece of an ever-growing sculpture garden — sure to add class to his Chesterfield Village (the “first masterplanned community ever developed in the St. Louis Region.)”

In conclusion: the J. Seward Johnson juggernaut cannot be stopped! Emboldened by a recent decision in support of his over-sized sailor/nurse liplock “Unconditional Surrender”, and with the encouragement of well-heeled builder patrons from coast to coast, we predict that soon there will be a JSJ sculpture in every American hamlet that aspires to artiness. His only serious competition in this march to total public art project domination seems to be the proliferation of those endless painted fiberglass CowParades. [Post by Anne D. Bernstein]