« Dead Pope Is Installed In Funeral Museum | Main | You Say Potato: The Power Of The “M” Word » 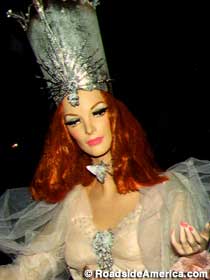 We were surprised to read in the Gary Post-Tribune of the demise of Indiana’s Oz Fest, and of the upcoming shuttering of Chesterton’s Wizard of Oz Museum. Only three years ago the festival was so successful that it moved out of Chesterton to an expo center a dozen miles away in Valparaiso. What happened?

Chesterton blamed the weather. We think that it was the over-reliance on our precious Munchkin resources.

In 1939, when the Wizard of Oz premiered, America had 124 living Munchkins; now there are only seven still breathing. Any Oz Festival worthy of the name needs them to guarantee a crowd. But these Munchkins weren’t just waving from car windows or kissing babies — they were expected to put in long days of festival work for meager compensation. When a dispute over Munchkin pay erupted in Chesterton in 2005 — thinning the already dwindling Strategic Munchkin Reserve — it was as if Indiana had been slammed by an airborne dwarf. Oz Fest never recovered.

While our supply of Flying Monkeys has long been depleted, the Munchkins are still out there, making themselves visible in places not far from Chesterton. They’ve moved on, and their message is clear (at least to us). Other Oz vortexes had better learn not to mock the law of Munchkin supply and demand.

More on Wizard of Oz Festival

One Response to “Our Dwindling Strategic Munchkin Reserve”