Canada’s newest attraction, the EdgeWalk, tethers visitors to cables and lets them teeter over the edge atop the CN Tower, a quarter-mile high above Toronto. 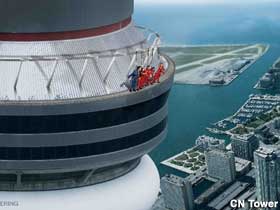 What prompted Canada to take its tallest building, “Canada’s Wonder of the World,” and turn it into a thrill ride?

America failed to win that war when it failed to conquer Canada. The Canadians are pleased about that, and over the past few years have rolled out several attractions that seem to bolster the idea that Americans are losers. First there was Niagara’s Fury, better than anything on the U.S. side of the Falls. Then there was the Monument to the War of 1812, visually reducing America’s military effort to a toppled toy soldier.

And now this. You want kicks? Canada seems to be saying. Forget the U.S. and its Bridge Walk and Skywalk. EdgeWalk beats them both.

A stroll on EdgeWalk isn’t cheap: $175 Canadian or you-figure-it-out in real money. Participants are screened for drugs, separated from all of their carry-on possessions, zipped into bright colored suits, and released to follow a five-foot-wide ledge around the roof of the CN Tower’s rotating restaurant, 1,168 feet above the pavement. There are no guardrails. The tethers are just long enough to allow thrillseekers to lean out over the void without tumbling to their doom.

EdgeWalk can stand on its own, even without a hidden agenda. There really is no convenient taller place in the Western Hemisphere to dangle tourists from a rope. The USA may just have to swallow its pride and say, “Well done, Canada.” You beat us in 1812 and you beat us in 2011.

Then we’ll bungee jump above EdgeWalk from our Spaceport America rocket ships.

EdgeWalk: Quarter-Mile in the Air

More on EdgeWalk: Quarter-Mile in the Air

One Response to “EdgeWalk: High Thrills Or Low Blows?”