We’ve long had an affection for Owney the Railway Mail Dog, even though he likely wouldn’t have returned the love. 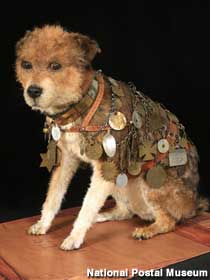 Stuffed Owney — he’s been dead for 114 years — is a novel presence at the otherwise stamp-centered National Postal Museum in Washington, DC.

Owney was a clever mutt and the unofficial mascot of America’s late 19th century railway postal clerks. He rode the rails and acquired a postal suit of armor made of metal tags from the hundreds of post offices that he visited. But he didn’t always get along with people. When Owney allegedly attacked a mail clerk in Toledo, Ohio, he was shot and became Stuffed Owney. Since 1993 he’s been in a glass case at the Postal Museum.

Early in 2011 it was announced that Owney would be honored on an official U.S. postage stamp. This gave the Postal Museum the motivation to give Owney a makeover. In May, Owney was replaced by “Phony Owney” at the Museum while the real dog’s nose was made more doglike, his eyes softened, his bald spots patched, and his suture scars hidden.

Owney 2.0 was unveiled on July 27, and it was announced that his postal likeness was also a state-of-the-art “Intelligent Stamp.” According to Marty Emery, manager of internet affairs for the Postal Museum, pointing your iPhone camera at any Owney stamp (or waving the stamp in front of your Mac desktop camera) will trigger an “augmented reality experience” where a 3-D Owney pops up on your screen. “He kind of prances around, his tags jingle, he stops and sits and barks,” said Marty.

Unfortunately, Marty is one of the few people on Earth who can make Owney dance right now. The official app that makes this happen is still on review with Apple. Marty said that it should be available in the iTunes store by mid-August (the Postal Museum web site will link to it). PC and Android users wait even longer.

The Intelligent Stamp may quickly go the way of Betamax and the Earth Shoe, but we think tag-bedecked Owney would’ve appreciated its theatrics. Just be thankful that he’s not alive; all those people waving their mobile devices probably would have made him bite.