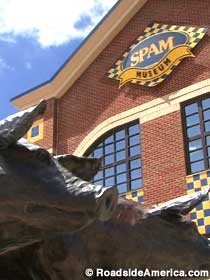 An article in the New York Times singled out SPAM — America’s iconic mystery meat — as “perhaps the emblematic hard-times food in the American pantry.” It then suggested that the economic collapse was good news for SPAM workers in Austin, Minnesota, since penny-pinching Americans will be more apt to eat what they produce.

We don’t know about SPAM’s future, but we can say that it doesn’t need a market meltdown to make it popular. The SPAM Museum is evidence of that; you don’t build a museum to a food product if it isn’t beloved! When we visited a few weeks ago, before the crash, the place was packed. Good times, bad times; America loves SPAM.

What we found interesting in the Times’ piece was its speculation that other SPAMlike foods will also flourish during the current crunch. If that’s true, then the folks at the Kool-Aid Museum and the World’s Largest Popcorn Ball should stock up on t-shirts and postcards; the good times are here!