For the last ten years Joseph Hurt has run his Creation And Natural History Museum out of downtown Stone Mountain, Georgia. Now he’s moved it 40 miles east to the town of Social Circle — 50 exhibits packed into eight 53-foot trailers. The grand opening is November 20.

Hurt and his family have designed attraction exhibits since the early 1970s, and this museum reflects their emphasis on visuals. We’ve been visiting more museums with a Biblical take on science and the natural world — in places like Santee, California or the mega-museum in Petersburg, Kentucky. But the museum in Social Circle sounds as if it’s probably closer in spirit to this one.

“I believe that the whole universe was created by a being called God,” Joseph said. “Our goal is to present examples of God’s creations in a beautiful manner.” 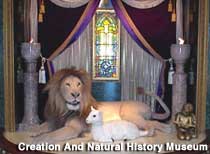 To that end, the museum is packed with colorful displays of skeletons, flowers, butterflies, seashells, meteorites, fossils, and birds. “The birds died down at Busch Gardens in Florida,” Joseph said. “I’m a taxidermist for 62 years, and I mounted a tremendous amount of them.”

Among Joseph’s many specialties is animatronic animals, and a highlight of the museum is “Mr. Lion and his Little Friend, The Lamb,” which are moving, talking animal robots. According to Joseph, the robots engage in back-and-forth banner — written by Joseph — to further the message of the museum. Joseph gave us an example from the lamb: “Mr. Lion, I notice this big cross behind me here. What in the world does this cross represent?”

Joseph said that the museum in Stone Mountain was a hit with seniors, church groups, and home-schoolers. He expects it to be the same in the new location, which is behind a popular southern cooking restaurant where he likes to eat.

Directions:
I-20 exit 98. North on Covington St./Hwy 11 for three miles into town. The museum is on the northbound side of Hwy 11 just north of Holly St., in the Blue Willow Village, which is behind the Blue Willow Inn Restaurant.
Status:
Closed