The Civil War ended almost 150 years ago, and badly for the South. But in Columbus, Georgia, rebel pride is back on display — in a big way. 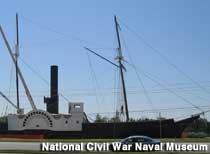 “One of our benefactors came up with the idea of building a ship,” said Jon Ezzell, the museum’s director of communications. The reason, Jon said, was that the museum itself conforms to Columbus’s strict public building code, which made it look like a lot of other public buildings in Columbus. “People were driving by, not realizing what we were,” Jon said.

Building a life-size ship by the highway would solve that problem.

At first, the museum wanted to create a replica of the Confederate ironclad Atlanta, but the Atlanta really didn’t look like a ship — more like a bunker with a smokestack — and the idea was scrapped. The Water Witch, however, not only looked like a ship, but it served under both the Union and Confederate flags, which solved what could have been an awkward political problem. “We are the National Civil War Naval Museum,” Jon stressed. “We don’t take sides” — although he acknowledged that at least some citizens of Columbus enjoyed the idea of displaying a ship that the South had captured. 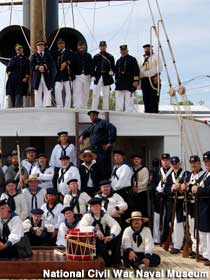 The Water Witch, although not as big as another landlocked ship attraction, is impressive. It was built by a Hollywood prop company, and was designed to be explored: the decks are real wood, the masts can support real sails, the side-wheels spin, the stack belches smoke. It will probably last longer than the real Water Witch, which was burned and sunk six months after its capture. The Confederates couldn’t find a place to hide it from the approaching Union Army.

June 3 is the anniversary of the Water Witch‘s capture. Jon said that the museum is considering staging a reenactment, and agreed that it would be fairly easy to find enough local people who’d be happy to participate.