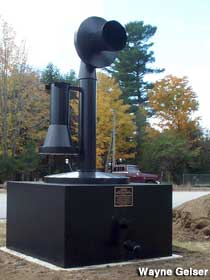 The people of Bryant Pond, Maine, feel proud, too — but for an entirely different reason. They were the last people in the U.S. to use hand-cranked telephones. And they will celebrate it on October 13 by unveiling a 14-foot-tall, jet black candlestick phone with a big crank.

If you thought that hand-cranked phones went out with silent movies, think again. Bryant Pond used them until 1983. Its citizens liked them. The giant telephone will mark the 25th anniversary of their passing.

The lifelike phone — an impressive sight — weighs 3,000 pounds and was built by local sculptor Gil Whitman. It stands only a couple of blocks away from the town’s three-story outhouse, which shows that Bryant Pond — like Wabash, Bellefontaine, and Chillicothe — pushed technological boundaries as well.