Gods In The House 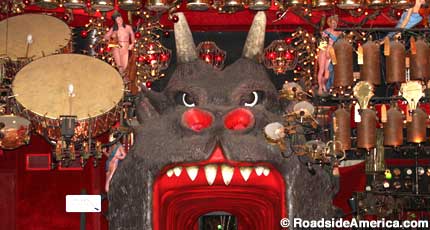 Author Neil Gaiman is a fan of Roadside America, particularly when it comes to his award-winning fantasy novel American Gods (He cites both our Roadside America books and website in its bibliography).

In American Gods, Gaiman writes that the “places of power” in America are its great roadside attractions; they’re the equivalent of holy temples in the Old World. Gods like to congregate in such places.

And one of the greatest roadside attractions in America is House on the Rock.

House on the Rock plays an important role in the novel, with scenes at some of its recognizable spots such as its Mikado music machine, its pizzeria, and particularly its “Largest Carousel in History,” which is ridden by the book’s protagonist, Shadow, and his associates, to spin them to a meeting with Odin.

Many fans of American Gods (and count us among its fans!) have made the pilgrimage to House on the Rock since the book was published in 2001, according to Jenny Greene, its director of operations. That traffic may increase significantly in 2017, when the American Gods TV series now in production will air on premium cable. Because, you know, only so many people read books, but everybody watches TV. 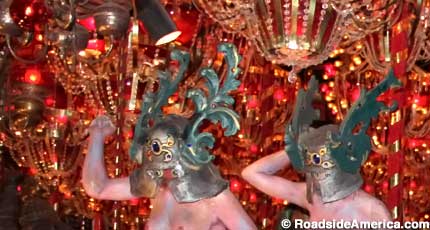 Jenny was understandably circumspect when discussing with us where, when, or even if the series would actually film at House on the Rock. We asked if she thought that visitors who saw the TV series might mistakenly try to ride the Largest Carousel, even though no one is allowed to do so. Jenny didn’t think it would be a problem. She said that American Gods fans have been “nothing but respectful” when they visit.

And actually, in the novel, Gaiman mentions the sign that “forbade anyone from climbing on it or from riding on the animals,” but his characters slip onto the rotating platform during an apparent lull in House on the Rock security vigilance.

There’s certainly enough at House on the Rock to dazzle any fanboy or -girl, even without a whirl to Valhalla. It is, after all, a roadside attraction worthy of the gods (in our first book, we selected it as the Seventh Wonder of Roadside America). And despite Jenny’s laid back demeanor (no magical beans were spilt), we wouldn’t be surprised if she’d already given thought to ordering extra dough and tomato sauce for the pizzeria, and a bigger coin box for the Mikado machine.

Sections: Attraction News, Coming Soon Comments Off on Gods In The House

House on the Rock

More on House on the Rock