Boy scout memorials often earn no merit badge for normalcy. The national one in Washington, DC, for example, features a scout flanked by scantily clad adults.

Now we hear that Grand Rapids, Michigan, is erecting its second statue of President Gerald Ford as a boy scout. Ford continues to be America’s only Eagle Scout President. 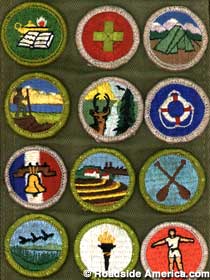 It made sense when a life-size bronze statue was erected of him as a 16-year-old with knobby knees outside of the local Scout headquarters — even if a statue of a President in shorts and knee socks is kind of funny (Abe Lincoln is the only other President that we can think of who’s ennobled as a teenager.). Ford considered his scouting years so important that a second, identical scout statue was felt to be necessary at his museum only a few miles away.

$77,000 was raised, the statue was cast again, and it will be formally dedicated on October 28. It will be permanently displayed indoors, safe from the youthful shenanigans that sometimes humiliate other statues, but that would never pass muster with an Eagle Scout.