Whatever Happened To Happy The Walking Fish And The Beautiful Atomic Tunnel? 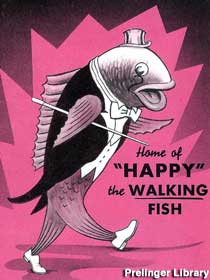 Those two questions may never be answered to everyone’s satisfaction. Both Happy and the Tunnel vanished over 50 years ago.

But thanks to sleuthing by Kent Donahue, a city administrator in Port Orange, Florida, we now know more than we ever imagined we would.

The iconic Happy, who lives forever in artwork by some unknown 1950s illustrator, was the star of The Beautiful Atomic Tunnel. According to Kent, who scoured Port Orange’s archives and interviewed aging residents, the attraction took two years for its owner — the elderly W.R. Johnston — to build. 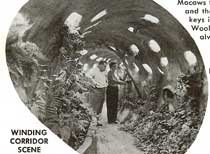 Happy was not some freak mutation, and the Tunnel was not some dark, subterranean fallout shelter. It was a whitewashed concrete tube, impressively long and entirely aboveground, with a crushed coral walking path down its center. The Tunnel was riddled with hundreds of small, odd-shaped windows that allowed in just the right amount of light and shade for Johnston’s tropical orchids, which lined both side of the path.

Selling the plants was Johnston’s main goal. Maybe if he had just opened an orchid shop he would have succeeded, but his bizarre sense of showmanship got in the way. The Tunnel at first had other names, such as Tunnel of Fantasy and Tropicolor Fantasy Tunnel. Johnston changed it to The Beautiful Atomic Tunnel late in its life (c. 1955) — too late, unfortunately. Within a year or two it was out of business, and by 1960 it had been bulldozed. 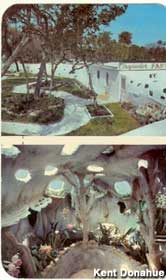 What of Happy? On the Tunnel’s brochure he sports a tuxedo, top hat, and cane, striding forward on his tail flukes like a hoofer on Broadway, raising hopes in some people (i.e. us) that he was the lucky byproduct of atomic radiation. Alas, Kent uncovered photos of the real Happy: a lump-like run-of-the-mill Southeast Asian catfish that was apparently coaxed to flop from pool to pool across a small sand bar inside the Tunnel.

Kent was baffled to discover that the attraction, which fascinates so many today, was so forgettable in its time that no one could tell him exactly where it had been located. But his research has convinced him that it stood along southbound U.S. 1, on the north end of Port Orange, on a spot currently occupied by a trailer park. He told us, with an historian’s pride, that its neighbor was (and still is) The Last Resort biker bar, made famous as the site where serial killer Aileen Wuornos was tracked down in 1991.

Sections: Places Comments Off on Whatever Happened To Happy The Walking Fish And The Beautiful Atomic Tunnel?