After years of legal battles with its future neighbors, America’s latest giant freeway cross has soared heavenward, along I-10 north of Kerrville, Texas. 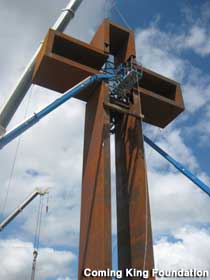 “The Empty Cross™” differs from previous Christian titans in several respects. It’s the pet project of Kerrville resident Max Greiner Jr., who sees it as the first of many identical crosses that he hopes to erect worldwide. Unlike previous giant crosses, this one is a hollow outline, made of steel, that weighs 70 tons and stands exactly 70 feet 7 inches tall. These numbers are significant to Greiner, who also says that God picked the hilltop location (which he says is halfway between the Atlantic and Pacific Oceans, resembles the Holy Land, and is on the same latitude as Israel).

Residents of a neighboring subdivision were unswayed by these arguments, and fought successfully to have Greiner and his “Coming King Foundation” build a wall between them and the towering tribute.

Greiner plans to surround The Empty Cross™ with a 23-acre cross-shaped garden filled with his Christian sculptures — but first he has must overcome another obstacle. A proposed high voltage transmission tower will reportedly occupy the same hillside and dwarf the cross!

Greiner has vowed to fight it, saying that power lines would block the view. We’d be more concerned about the proximity of high voltage wires to a 70 ton piece of steel — but we’ve learned that builders of giant devotionals sometimes don’t think about calamitous consequences until it’s too late.

530 Benson Dr, Kerrville, TX
Directions:
I-10 exit 508. Turn north onto Hwy 16/Fredericksburg Rd, then quickly turn left (west) onto Benson Drive. Drive past the car dealership, paralleling the north side of the freeway, then turn right and drive up to the parking area for the cross.
RA Rates:
Worth a Detour