From Hollywood to Kennywood 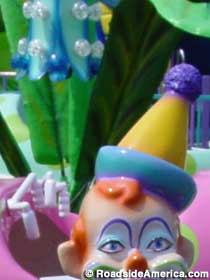 Writer/Director Greg Mottola based the script for his movie Adventureland on his experiences back in the 1980s working a summer job at the Adventureland Amusement Park in Farmingdale, Long Island. As decades passed and Mottola rose through the showbiz ranks, that particular Adventureland was renovated and updated beyond recognition. To retain a period piece feel, the film was eventually shot in a park that still retains the rickety weirdness of yesteryear: Kennywood, located in West Mifflin, near Pittsburgh, Pennsylvania. (Pittsburgh serves as a superior setting, anyway, because its landlocked direness emphasizes the dead-end nature of the main character’s hometown. Farmingdale can compete as far as boring suburbia goes, but it’s only a short distance from the beach and a brief train ride into Manhattan.)

Kennywood opened in 1898 as a “trolley park” featuring a dance pavilion, boating on a man-made lake and a Merry-Go-Round. Even though Adventureland showcases some of the classic vintage attractions added in the 20th Century, including a wooden rollercoaster, Kiddieland rides, clown face trash cans, and game stalls where no one ever wins a “big giant-ass panda” (except for bullies with knives) you won’t spot these amazing attractions from Kennywood’s past:

The park’s beloved Old Mill indoor boat ride went through many incarnations including stints as a Western Ghost town venture and an Around-The-World tour. Too bad that it was turned into the videogame-tie-in, neon-colored horror known as “Garfield’s Nightmare” in 2004. Talk about puke-inducing!

5 Responses to “From Hollywood to Kennywood”