It was a bad end to a good story. The World’s Largest Human Centrifuge, which had reopened in Warminster, Pennsylvania, after years of neglect, was shut down last November in a dispute between its landlord and the small group of admirers who gave tours of it to the public. 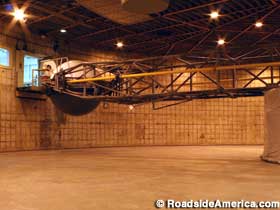 Now a truce has been declared. Beginning April 17 the Johnsville Centrifuge and Science Museum will reopen — only for six hours every month, but where else are you going to see a human centrifuge?

“There’s going to be a lot of interest over the next year,” said Mike Maguire, president of the museum. The centrifuge is reopening just in time for the last flights of the Space Shuttle and the conclusion of the U.S. government human space flight program. Astronauts were the centrifuge’s most famous test subjects, back in the 1950s and ’60s when it was obligatory to spin our spacefarers around a giant room to see how much they could take.

Mike said that several good things have come out of the centrifuge’s sedentary winter. “We’ve built up our political clout,” he said, meaning that a lock-out is less likely to happen in the future. And the landlord has finally put heat into the centrifuge building, so visitors will no longer have to wear thermals to take a tour (When we visited, we were too excited to notice the cold).

The fledgling museum has also used its downtime to acquire the original gondola used on the centrifuge– it’s the same human hamster ball ridden by Alan Shepard, John Glenn, and all the other Right Stuff astronauts. Mike said that the rusty relic, currently sitting in an outdoor storage yard in Maryland, would be trucked in later this Spring, and eventually displayed in a glass building next to the human centrifuge.

Sections: Attraction News Comments Off on Human Centrifuge Whirls Back into Public View