Just in time for the start of summer, Lake Delton has been refilled — and is once again providing a slick surface for Tommy Bartlett‘s iconic water ski show in Wisconsin Dells, Wisconsin. The massive lake vanished last June 9 when it broke through a dam and drained away in less than three hours. There was no water, and no water ski shows for the rest of 2008. 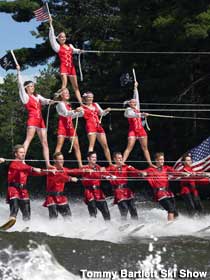 According to a report on WISC-TV, Friday’s opening performance was attended by 1,400 water-daredevil-starved spectators, and heralded as a “tremendous sight” by Tommy Bartlett’s president. In memory of the event, admission to the shows this coming June 9 will be free. Tommy Bartlett’s has taken a lemons-into-lemonade stance, stating that last year’s calamity energized the town into re-making the lake as “a revitalized resource that is more pristine, more boat-able, more swim-able, and more fish-able.” And just as ski-able.

Another tale of a big flood with a happy ending.