Elite Cave Bunker Opens To All

Kentucky has many big holes in the ground that are open to the public.  But as far as we know, no subterranean attraction in Kentucky or elsewhere has had its entrance in the middle of a metropolitan warehouse park — until now. 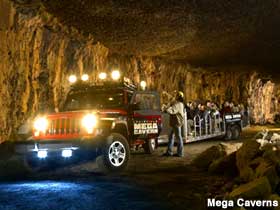 Say hello to Mega Cavern. The former limestone mine and underground storage facility covers over 4 million square feet, has 17 miles of roads, and burrows beneath an industrial zone and the neighboring Louisville Zoo. It will officially open to the public on June 1, although test tours have been underway for weeks, following a cautious let’s-just-see-if-this-really-works approach taken by the Underground Salt Museum in Hutchinson, Kansas.

“There’s a lot if excitement going on around here,” said Jackie Miller, who runs the Cavern’s group sales. Visitors are whisked through the tunnels on SUV-pulled trams. According to Jackie, Mega Cavern consulted with Fantastic Caverns in Springfield, Missouri, which operates a similar underground ride-thru, to iron out the details. “The tour-goers just are so amazed at the scale, the magnitude,” said Jackie. “So much stuff is going on underneath them and they don’t realize it.”

In addition to what could be considered predictable stops for exhibits on geology and mining techniques, Mega Cavern has a whole section set off “with dummies,” according to Jackie, on its role as a nuclear survival ark in the 1960s. “We were designated as the Cuban Missile Crisis Bunker,” said Jackie. “We have a replica of what it would have been like if those 50,000 people had to come down here if that nuclear bomb had gone off.”

50,000 people? Was that the population of Louisville at the time? “No, you had to have a ticket,” Jackie explained. And who had the tickets? “Dignitaries,” Jackie said. “Nobody knew about it unless you had a ticket.”

Sections: Attraction News Comments Off on Elite Cave Bunker Opens To All