Show Me Your Papers!

Starting on June 1, all Americans who visit Canada have to show a passport if they want to get back into the U.S. 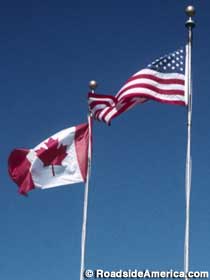 According to The Canadian Press, “those without proper documents are given a paper that says: ‘Noncompliant.'” After this wrist-slapping they’ll be allowed to re-cross the border, but only “for the next few weeks.”

Since only 30 percent of Americans have passports, this could make for serious problems later this summer.

Even if your travel plans don’t include Canada, feel some empathy for the criss-crossing flower-tenders at the International Peace Garden in North Dakota, and for the poor citizens of Derby Line, Vermont, whose library straddles the border. The next time that they check out a copy of Zamboni Rodeo or a DVD of Strange Brew, they may need a library card and a passport.

If you wander north to see the taxidermy and cheese store in Ontario or the embalming fluid bottle house in British Columbia — make sure that you have a passport with you.  You may think that it’s a joke, but it won’t be so funny if you end up scrubbing Alberta’s million-dollar outhouse for lumber camp rent because you didn’t have the proper papers to get back home.

One Response to “Show Me Your Papers!”