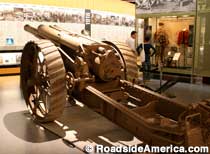 The National World War One Museum finally got a visit from a World War One vet. His name is Frank Buckles and he’s 107 years old. According to the New York Daily News, 4.7 million Americans fought in World War One, and Frank is the only one left (he was 16-years old when he signed up in 1917). The Museum posed Frank for photos next to its tank — which it also took forever to acquire — gave him a gold medal, and hung a picture of him on a wall.

The story of Frank is a lesson to all attractions: get your “eyewitness to history” visitors to come sooner, rather than much, much, much later.

In the non-military world, it’s almost too late for new eyewitness testimony and photo opportunities with survivors of the Great Molasses Flood or even the Hindenburg Crash (neither of these fascinating disasters have their own museums).