Black light adds a trippy glow to a host of otherwise unenlightened tourist attractions. For many decades, fluorescent enhancement has brought a dramatic beauty to your average mini-golf course, common cavern, or mundane mineral display. But how does black light really work?

Black light bulbs emit ultraviolet light. We humans can see light that falls within a certain spectrum: red, orange, yellow, blue and violet are visible to us, but above violet is ultraviolet, which we cannot detect (that’s why a black light room looks dark.) However, we can see the effect of UV light on certain objects, such as inspiring black velvet paintings of unicorns.

When a fluorescent object basks in black light, the substance (called a phosphor) absorbs radiation and then almost instantly throws it back out as visible light. That’s because some energy is lost along the way (released as heat) so the re-emitted light has a longer wavelength. This is what we at RoadsideAmerica.com call the “awesomeness wow drool chin” factor.

Aside from its decorative and entertainment uses, black light also has its practical applications: as a CSI-style forensic tool (semen and other bodily fluids naturally fluoresce); to “whiten whites” (modern detergents contain phosphors, so it’s likely that your undies glow under UV light); and in the security arena (those ubiquitous hand stamps that you get when entering overcrowded nightclubs). 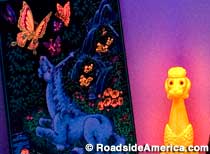 Even some plants and animals glow in UV light. The brown spots on a rotting banana will display a blue halo, caused by chlorophyll breaking down into FCC particles (fluorescent chlorophyll catabolites — later there will be a test). Some scientists say that studying this fruity phenomenon holds the key to a deeper understanding of “programmed cell death” and the growth of cancer. But perhaps they’ve just been staring at the black light too long….

And then there’s Ruppy, the world’s first fluorescent puppy! She’s cloned and transgenic as well (she has genetic material from another animal: in this case, cloned cells that include a gene produced by sea anemones.) Created in a South Korean university, Ruppy looks like any other beagle puppy in natural light but glows red under UV light.

Does this mean future generations can look forward to a visit to the local glow-in-the-dark zoo?

[In Parts 2 and 3: Our fluorescent favorites!] (Post by Anne D. Bernstein)