Well, that didn’t take too long.

Nine days ago, Illinois governor Rod Blagojevich did the unthinkable and shut down Lincoln’s Log Cabin — and a big Indian statue as well — claiming that the money wasn’t available to keep them open. 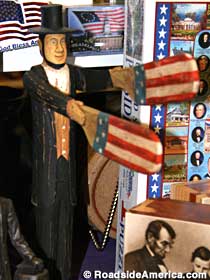 This morning, Illinois governor Rod Blagojevich was arrested and taken away by the FBI, his pouf of hair in distress.

Publicly, the governor is being charged with trying “to sell the U.S. Senate seat” formerly occupied by Barack Obama, according to U.S. Attorney Patrick Fitzgerald.

We condemn his actions, which were indefensible — unless, of course, he was trying to raise money to reopen the cabin and the statue.

Don’t laugh at that idea. You don’t mess with the Railsplitter, not in the Land of Lincoln, and certainly not on the eve of his 200th birthday (And don’t forget that a 48-foot-tall Indian was involved as well). Maybe the governor — too late — realized the error of his ways and was desperately trying to find a way out of a calamitous situation.

Too bad. Now that he’s gone, let’s use his salary to reopen the cabin and the Indian.