Of the many virtues attributed to mothers, patience usually places near the top of the list — mostly patience with their ungrateful kids and kid-like husbands. 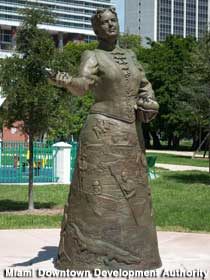 The people of Miami know that feeling. They’ve been waiting 112 years to erect a mom-ument to Julia Tuttle, “The Mother of Miami.”

Julia Tuttle was a landowner (and mom) who grew oranges in the subtropical wilderness of 19th century south Florida. She thought it would make a good spot for a city, but she couldn’t convince Henry Flagler to build his railroad to it. Then a big freeze struck north Florida, killing the orange groves — but not Julia’s. She sent Flagler some oranges, and that’s all the convincing he needed. The railroad came, Miami was born, and Julia, her work done, died.

That was in 1898. Generations of civic-minded Miamians have waited for a Julia Tuttle statue ever since, even as comparatively obscure towns erected their own mom-uments — some more flattering than others. 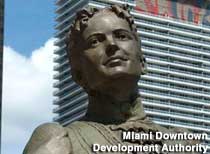 At last, however, Miami’s patience has been rewarded. A bronze Tuttle statue has just been unveiled in that city’s Bayfront Park. It stands some ten feet tall, and captures Julia’s moment of triumph as she presents her orange bounty. The statue is mounted directly on the ground, so that everyone can get a good look at her skirt, which is engraved with old-time Miami scenes, including an alligator, and one of Tuttle giving Henry Flagler a deal-sealing handshake.

Sections: Attraction News, Statues Comments Off on Miami Gets Its Mom-ument

Statue of The Mother of Miami

Chopin Plaza, Miami, FL
Directions:
Downtown, at the southern end of Bayfront Park, next to the playground.

More on Statue of The Mother of Miami