• St. Patrick’s Day: Those who like parades but don’t like standing around to watch them will probably enjoy Tuesday’s World’s Smallest St. Patrick’s Day Parade in Enterprise, Alabama. It has only one marcher, who circles the town’s Boll Weevil Monument, and that’s it. Another satisfying spot would be the World’s Smallest and Shortest St. Patrick’s Day Parade in Blue Springs, Missouri, which extends only from one side of the street to the other. It has the added advantage of permanent start-and-end-point plaques that let you recreate the parade for yourself on any day that you visit. 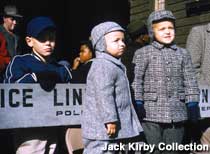 • Parades on Collision Course with Recession? Speaking of parades, leave it to the calm voices at Fox News to come up with “Recession Puts Nation’s Parades in Peril.” According to Fox, “potentially turbulent times along parade routes across the country” are just around the block, and “the cost of helium has nearly tripled in recent months,” threatening our supply of giant balloons. All the more reason, we say, to view parades at parade rest in the parade museum in Shenandoah, Virginia — whose operators don’t think that parades are going out of fashion any time soon.

• Simpsons Shrine on Hold: A TV station planned to erect a granite statue of The Simpsons in Hollywood, Oregon (the Portland neighborhood where Matt Groening was raised) but has put the project on hold. The statue, which would have shown the cartoon family sitting on a couch, watching TV, was to be unveiled in time for the show’s 20th anniversary (and the TV station’s 25th), but it’s been postponed for unspecified economic reasons. Fans of the show can still travel cross-country to Berkeley Springs, West Virginia, where the Simpsons have recently become members of the Farnham Colossi.

• Skywalk Security: We can all breathe a little easier now that surveillance cameras have finally been installed at Arizona’s Grand Canyon Skywalk. As if to underscore the remoteness of this attraction, the cameras will be monitored from Las Vegas, which is 120 miles away. That may sound like a waste of surveillance, but any trespasser probably won’t get very far before the law arrives, even if it has to come from another state….