Pocket Change Can Add Up To Big Bucks 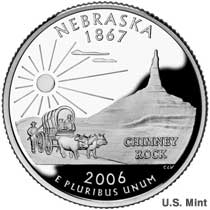 Nebraska’s “Chimney Rock” has reaped attendance benefits from being on the back of a quarter, according to the Scottsbluff Star-Herald (Although the coin didn’t call the rock by its original name). This kind of free advertising was surprisingly absent from the recent “50 States Quarter Program” — but now the states have a second chance.

“America’s Beautiful National Parks Quarter Dollar Act” was signed into law at the end of 2008, and will reportedly spare us from having to see an eagle on the back of our quarters until 2021. Despite its title, each state doesn’t have to choose a Park for the back of its quarter; it can choose a National Historic Landmark or a Site or a District.

We did some checking, and found that a surprising number of Roadside-caliber attractions actually have National Historic designations. Here are a dozen suggestions (and there are many more). 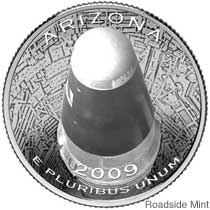 Utah: The Biggest Pit in the World at the Kennecott Copper Mine

We urge all Roadside fans to make their voices heard. Feel free to comment below and suggest what landmark best represents your unique state. Let’s get those quarters rolling in!

Sections: Attraction News, Rants Comments Off on Pocket Change Can Add Up To Big Bucks