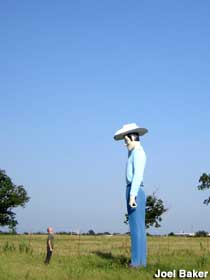 Joel Baker’s life changed in Dade City, Florida, on January 31, 2012. That was the day he visited his first Muffler Man.

Since then, Joel has been on a quest to visit every single Muffler Man on the planet. In less than 16 months, he’s already been to 97.

“I went to your site, and realized that they were all over,” said Joel, remembering the first time he came across the RoadsideAmerica.com Muffler Man tracking chart. It was at that moment, or at least very close to it, that Joel was inspired to get out of the house and onto the road, hunting down Muffler Men for himself (bonus: his video production day job sometimes places him within off-hours striking distance of Muffler Men locations).

This year Joel started chronicling his travels in his American Giants blog, and is hard at work enhancing it with episodes of a YouTube video documentary series he’s creating. His first episode is almost completed. “If it wasn’t for what you guys have done and all the effort that you’ve put into it,” Joel said, he wouldn’t have the head start he needed to begin his project.

He’s well along in his personal journey to full Muffler Men enlightenment, a journey so many others have attempted and failed (or, at least, come to their senses). 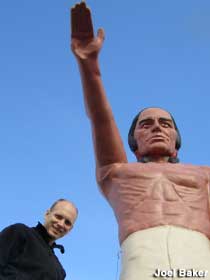 For example, who goes all the way to Puerto Rico chasing a vague RoadsideAmerica.com sighting from 1999? Joel tracked down that country’s only known Muffler Man in the town of Caguas.

Though he speaks no Spanish, he said that he pulled up a photo of a Muffler Man on his smart phone, walked around the town showing it to people. “When they started nodding their heads and pointing, that’s when I knew I had something.”

“That’s what it’s all about,” said Joel, savoring the memory. “When you go to all this effort, travel all this distance, and there one stands.”

Joel’s first 30 or so M-Man visits were simple photo shoots, but since then he’s been “knocking on doors,” trying to learn the history of each Muffler Man that he sees. It’s a task often thwarted by business owners unaware of the historical importance of their big fellas — and big ladies, too; Joel views Uniroyal Gals as part of the Muffler Man family, but draws the line at Big John statues.

“It’s gotta be from International Fiberglass,” said Joel, naming the manufacturer. “Anything that isn’t is definitely not a Muffler Man. I still find them interesting, but I don’t count them on my list.” 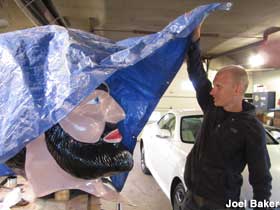 Joel cites the disappearance of nearly all the Big Friend statues as one of the great Muffler Men mysteries (he hopes eventually to solve it), and dreams one day of “finding something that’s never been found,” a Muffler Man that was taken down, stuck in a barn, and forgotten; or that stands unrecognized on some obscure highway.

“To find something like that would definitely be a Holy Grail for me.”

Muffler Man adoration affects many more people than Joel, and his travels and blog have brought him into contact with others who are similarly afflicted. What is it, exactly, about Muffler Men that’s so appealing; what inspires people such as Joel to do things that they otherwise wouldn’t even consider?

“I’m still asking myself that,” said Joel, laughing. “Maybe, one day, at the end of all this, I’ll figure that out.”