Two Gallows, One Beatle: Good Times At The Old Jail 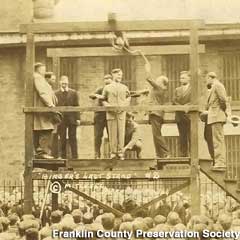 “It was one of the top ten days of my life,” said Bob Rea, president of the Franklin County Historical Preservation Society in Benton, Illinois. He was referring to May 4, 2013, the day that he first laid eyes on the gallows that hanged Charlie Birger.

Birger was a mob boss/Robin Hood figure in Southern Illinois in the 1920s, part of a complicated story that involved bootlegging, immigrant coal miners, and the Ku Klux Klan. He was charismatic, but after he ordered the execution of the mayor of a nearby town, the authorities felt it was in everybody’s best interest to hang him.

The execution was done as a public spectacle on April 19, 1928. Photos from that day show Birger standing above the assembled crowd, clearly enjoying his last moment in the spotlight.

The gallows were disassembled, stuck in a basement, made a brief reappearance in 1973 at a July 4 event, then vanished.

The jail where Birger had been hanged eventually became the Franklin County Jail Museum, which displays Birger’s jail cell, his bulletproof vest, his Tommy guns, and the handcuffs he wore for his execution. 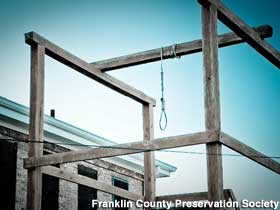 Bob Rea’s in-laws built a replica gallows based on old photos. But the original was thought to be gone for good.

That was until Bob got a phone call on May 3, telling him that the gallows could be found hidden in the loft of a nearby abandoned barn. What had happened, Bob said, was that a farmer had stored the disassembled gallows as a favor, and did it so efficiently that even after he had been dead for 15 years, with the barn ransacked by treasure-hunters, no one had found it.

The real gallows are now displayed as they were found, in pieces, on the floor of the jail, protected from the elements, disassembled because they’re 18 feet tall and the ceiling isn’t high enough. Bob said that reassembly is still some time off. He said he really wasn’t in a hurry to have it done because he now knows that the replica, built to be accurate, is “way off.” 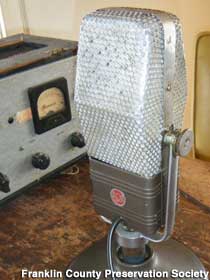 History happened in Benton again, 35 years after Birger, when George Harrison of the Beatles came to town to stay with his American-based sister. Unfortunately for George, this was in 1963 and he wouldn’t become famous until 1964.

George visited the local radio station, was interviewed on-air, and was allowed to play the Beatles’ new record, “From Me To You.” He was then  politely told, according to Bob, that, “British music wouldn’t sell.”

Subsequently realizing its error, the county preserved the radio station studio inside the Jail Museum — including the microphone and turntable, but not the record, which is still owned by the daughter of the station manager. “That’s her most prized possession,” said Bob.

Bob said that later in 2013 year, on the 50th anniversary of George’s visit, a historical marker will be unveiled in Benton calling attention to the important event. He also said that, for now at least, the Jail Museum has no plans to bring back its very popular t-shirt, “I Hung Around the Franklin County Jail,” illustrated with a picture of the Birger hanging.

“We thought it was a bit distasteful,” said Bob, although he acknowledged that it sold out in a hurry.

Sections: Places Comments Off on Two Gallows, One Beatle: Good Times At The Old Jail