Hats On To Stonewall Jackson, Defender Of Lexington 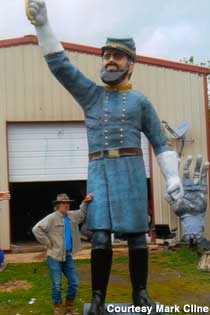 May 10, 2013, was the 150th anniversary of the death of Confederate general Stonewall Jackson (His arm was dead and buried seven days earlier). Mark Cline, born and raised in the South and a builder of large and unique sculptures, thought that Stonewall should be remembered on this date. The general’s hometown of Lexington, Virginia, however, was content to let the anniversary pass quietly. So Mark decided to build a permanent, 20-foot-tall statue of Stonewall, mount him on a five-foot-high stone wall, and stand him at the outskirts of the city, facing north, as if protecting it from the Yankees.

“It was also about the hat,” said Mark, who is something of an authority on Stonewall, having portrayed him in a local theater production. Stonewall, said Mark, was famous for his little cap, given to him by his wife. Lexington has two statues of Stonewall, yet one depicts him bare-headed, and the other has him wearing “some old funky-looking thing,” according to Mark, that does not resemble Stonewall’s famous headgear.

The statue, Mark added, was scheduled to be anchored in place at 3:15 pm, the moment of Stonewall’s death. It’s on private property, but Mark placed the statue to be “extremely visible” to those driving south into town on US 11. 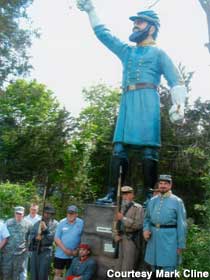 “Stonewall stands for our heritage, our Christian values, and our rights,” said Mark, noting that the statue’s official title, “Onward Christian Solider,” is written very tiny to avoid violating local zoning codes against signs. “To some people around here he’s like Jesus,” said Mark of Stonewall, but to Mark the statue is more an expression of freedom of expression, the right to put up a big statue on your land without fear that some local bureaucrat will take it down. “We’re exercising our freedoms as Americans,” Mark said, although whether Stonewall would endorse this particular interpretation of freedom is something we will never know.

Brandon Dorsey, Commander of the Stonewall Brigade in Lexington (a Civil War reenactor group), worked with Mark to erect the statue, and noted that it depicts Stonewall with his officer’s saber raised. “There are some who would question that,” said Brandon, as Stonewall was known to have assumed that pose only once, “and the sword was so rusty he had to raise it in its scabbard.” So Mark Cline’s statue may be ending the hat controversy and starting another.

Lee Hwy, Lexington, VA
Directions:
I-81 exit 195. Drive south 2.5 miles on US Hwy 11. Statue on the right, on northeast side of the tree line next to the Devils Backbone Outpost Brewery. Private property; visible from the road.
Admission:
Free
RA Rates:
Worth a Detour

2 Responses to “Hats On To Stonewall Jackson, Defender Of Lexington”