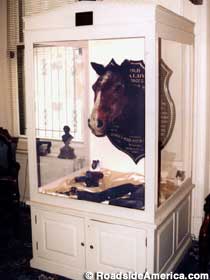 Roadsiders who are in Philadelphia over the next few days should take a trip to 1805 Pine Street. That’s the townhouse that holds the Civil War and Underground Railroad Museum — formerly the Civil War Library Museum — and its star attraction, the head of Old Baldy, rugged hero horse of Union Gen. George Meade.

According to a local TV news report, the museum is closing on Saturday, August 2, and won’t open again until 2010. By then it will have moved to larger quarters at 3rd and Chestnut, at the First Bank of the United States, and only a couple of blocks from the jellybean children.

Old Baldy is a beloved head, so there’s little doubt that he will be stored carefully and will occupy a place of honor in the new museum. But two years to move only a few blocks? If the Civil War had moved at that pace, then the North would have wasted countless opportunities — oh, wait, never mind.

Another of the Museum’s prized exhibits that’s about to go into limbo is the colorful loungewear worn by Confederate President Jefferson Davis, “which many other museums openly covet,” according to the news report.

Sections: Attraction News Comments Off on Last Chance To See Old Baldy Until 2010