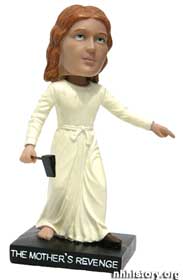 One of the angriest icons in America is Hannah Duston, pioneer mom. Turning on her captors, she killed and scalped a dozen Abenaki Indians with a tomahawk in 1697, and two statues were erected to commemorate her hacking spree: one in her home town of Haverhill, Massachusetts, and the other at the massacre site in Penacook, New Hampshire.

The Hannah Duston bobble head is the latest in a series of eight nodding statuettes of historical New Hampshire citizens — such as Daniel Webster and Franklin Pierce — sold to raise money for the Museum of New Hampshire History (You can buy one for only $16 plus $8 shipping.). And the Hannah bobble head, only out a few weeks, is already stirring up trouble in the New Hampshire countryside….

The man behind the dolls is Bill Veillette, executive director of the New Hampshire Historical Society. “At first we considered making miniature statues,” he told us, “but I thought, ‘That’s boring.'” Bill’s idea came to him when he saw that his bank was rewarding customers with bobble heads of a local hockey player. “Today’s generation understands it,” he told us. “I can’t explain it, but you’ve made it in the world if you’re turned into a bobble head.”

Bill admits that the New Hampshire Historical Society’s Hannah is modeled on the statue in Massachusetts, not the one in New Hampshire. “We thought the Haverhill statue had a nicer pose,” he said. “And it kind of avoided having her hold scalps.” (The New Hampshire statue shows her clutching her grisly trophies.) “We thought that might not be very appealing.”

According to Bill, a spokesman for the Abenaki people said that there was “no love lost” between them and Hannah, but that they had no problem with the bobble head if it was “done in good taste.” (And it is more restrained than the bobble head of fellow hacker Lizzie Borden.) The Abenaki also concede that Hannah is a legitimate New Hampshire historical figure, an opinion shared by Bill. “Her story is told to every kid who comes up through the school system of New Hampshire.”

Sales of Hannah Duston’s bobble head are expected to be brisk. “She’s kind of our first action hero,” Bill said. “She’s the only bobble head we have with a weapon.”

Now we hear that one NH Historical Society employee has quit over the souvenir, and another has refused to sell them!