“I just got carried away,” said David Saxe, creator of Sin City Sindy in Las Vegas, Nevada. That explanation might sound lame in some Las Vegas situations. In David’s, however, it’s perfectly justified. 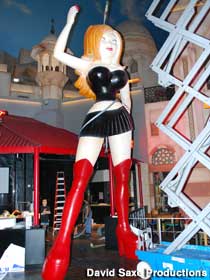 Sin City Sindy is a cartoonish stripper, reportedly 31 feet tall, possibly the largest fiberglass lady in the world. She’s a logical progression in size and naughtiness from the already towering and sassy Uniroyal Gals, although David said that he knew nothing of them when he created his buxom colossus.

David owns the V Theatre, a venue known for its every-woman-can-be-a-stripper pole dancing classes. He also owned a tiny mall bar next to the theater, whose only customers, according to David, were his novice stripper students. Both places are part of the Miracle Mile shopping mall (This also makes Sindy the largest indoor icon in Las Vegas, topping the headless statue of Lenin).

David’s wife Alana suggested that he give his lonely bar a stripper theme, and call it “Stripper Bar.” David worried that women would be offended by it. “My wife said, ‘No they won’t,'” David recalled. “‘I’m a woman, and if I’m coming to Vegas, I would want to see a stripper-themed bar. That would be cool!'”

David imagined a place that was not a strip club, but a bar run by strippers, serving saucy items such as Stripper-tinis and G-String Fries. He needed a visual gimmick to draw attention to it. “I thought a cartoon character girl would soften it up,” he said. “And the next thing I know I’ve got a plan for a 30-foot-tall stripper in the entryway, and you have to walk between her legs to get in!” 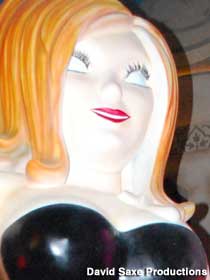 David was certain that the mall would reject his idea, but he pitched it anyway. “And they said, ‘All right!'” David recalled. “‘We’re in Vegas. Try it!'”

Sindy was originally designed with her backside out, leaning over the bar’s tin roof. That wasn’t an image that David wanted to convey (“I didn’t want pervy guys”). So Sindy was softened into an impossibly curvy, hip-thrusting power girl grasping a stripper pole — a mirror-image pose of a Uniroyal Gal. Could that mean that Uniroyal Gals were modeled on strippers of the 1960s?

“I’m putting a tattoo on her inner leg: ‘You must be this tall to ride this ride,'” said David with a laugh. And David instinctively understood one of the guilty pleasures of visiting a giant statue in a skirt. “If you look up her skirt when you walk in, a flash goes off and a camera takes a picture of you,” said David. “And you get to keep the picture.”

3663 Las Vegas Blvd. S., Las Vegas, NV
Directions:
Sin City Sindy stands indoors, at the entrance to Showgirl Bar, which is part of the Miracle Mile shopping mall, which is part of the Planet Hollywood Hotel and Casino. On the Las Vegas Strip, at the corner of Las Vegas Blvd S. and E. Harmon Ave., just south of the fake Eiffel Tower. Northeast corner of the mall, next to the V Theater.
Phone:
702-260-7200
RA Rates:
Worth a Detour