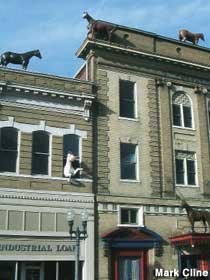 Fiberglass artisan and prankster Mark Cline sent us pix of his latest in a series annual April Fool’s installations. In years past, the “Barnum of the Blue Ridge” has set up elaborate temporary scenes of dinosaurs invading a town, Hannibal and his elephants crossing a landfill, and some gags that continue to linger and be popular roadside stops, such as 2004’s Foamhenge.

This time, he’s struck in Clifton Forge, Virginia. Horse statues have appeared all over, on top of and around the town’s Masonic Theater. Mark wrote to us that “all five horses were installed yesterday evening.” We spoke with Mark briefly that day (while he was up on the roof) and he said that at first he planned for only four horses, but increased it to five because he didn’t want anyone in town to think that the Apocalypse had arrived. 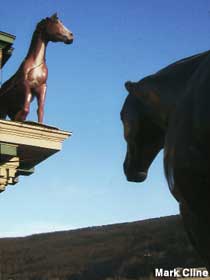 Clifton Forge is probably the place to be at this moment. Cline: “What’s cool is I met and had breakfast with a woman in Clifton Forge whose birthday is TODAY!  (perhaps she just April fooled me so I’d buy her breakfast…regurdless, it worked ).”

According to Cline, the display should be visible to the public through mid-May 2010:  “They’ll be horsin’ around the Masonic Theatre for at least 45 days.”

August 2010: Mark Cline reports the horses came down on August 21.