« Queen of the Air | Main | The Incredible Indian Head Transplant »

Future historians may wonder how John Strong Jr.’s World’s Largest Oldest Traveling Sideshow became the permanent World’s Largest Sideshow Museum in Uranus, Missouri. This is how it happened, as described to us by Uranus mayor Louie Keen:

“John Strong Jr., he’s the Big Dog in the sideshow game,” Louis said. “He owns the World’s Largest Oldest Traveling Sideshow. He was searching for two-headed goats, and when he Googled ‘two-headed goat,’ up popped an article about my two-headed goat in Uranus. And he said, ‘This sounds like my kind of guy!’ And he called me and said, ‘Man, we’re tired of the touring. Would there be any space up there for us?’ And I said, ‘Yes!'”

That was in December 2017. Louie promptly closed his Big Louie’s Burlesque Saloon and turned over its 8,000 square feet to the Sideshow Museum – probably the only time in history that strippers have been shoved off a stage by a two-headed baby. “John has one of only three real two-headed babies,” said Louie. “It’s a very famous piece,” he said (It was featured in the 1967 film, She Freak). We remember seeing the baby, floating in a big jar, in the early 1990s. Its sideshow banner became the frontispiece of our New Roadside America book. 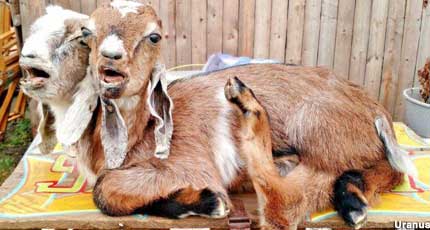 Louie’s personal collection of freaks, including a half-fish-half-monkey, an Alligator Boy, and the two-headed goat, already serves as decor in his Uranus Fudge Factory and General Store. But the John Strong Jr. collection dwarfs all others, and Louie is thrilled that it’s come to Uranus.

“It’s mind-blowing – an unbelievable collection. There’s just nothing else like it,” Louie said. “People are gonna make trips just to see it. It’s that cool.”

One Response to “Traveling Sideshow Settles In Uranus”