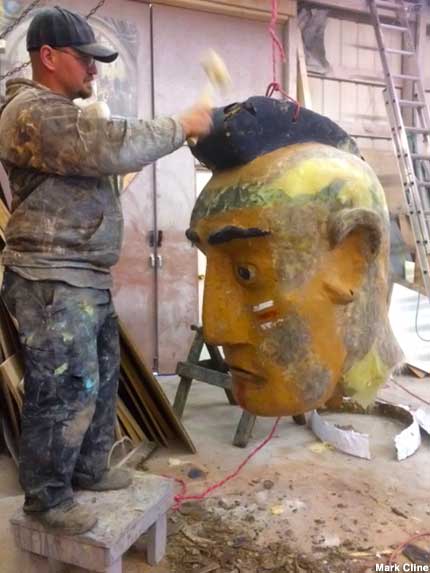 Big John, a giant Indian statue outside Pratt’s BBQ Barn in Kingsport, Tennessee, broke his neck in early April 2018. We quickly informed Mark Cline, fiberglass wizard and creator of Dinosaur Kingdom II, of the calamity. This is his report:

“I called up Pratt’s and spoke with April the manager. Apparently it’s not so easy to find a professional repairman of giant Indians in the Kingsport area. Fortunately, the city was close enough to drive down from my Enchanted Castle Studios in Natural Bridge and get a good look at him.

“The original plan was to hoist the head up with a bucket truck and for me and my crew to fiberglass it back into place. That would have been fine — except that we quickly found that the head was much too heavy to do that safely. The biggest concern was that there was inside structural damage that we didn’t know about, so the best plan of action was to just take the head down, bring it back to my studio, make an exact lightweight fiberglass duplicate, and put the new one back up.

“When we got the head back to the studio I put the head on the scale and it weighed 120 pounds. The new one will weigh about 17 pounds when complete. Due to our super-slammed spring schedule it will be at least a month before we can return and complete the head transplant. As for the original head, we are removing some of the concrete that was inside to lighten it. It was repaired before we began making the duplicate.

“The original head will also be returned to Pratt’s where, who knows, they might auction it to help pay for repairs. But I think it would be a groovy idea to strap it onto one of their vans to ride around when they do their catering gigs… not to mention how great it would be for parades!”

One Response to “The Incredible Indian Head Transplant”