It was a tall order when the Chamber of Commerce of the California mountain town of Idyllwild decided to commission a huge wooden monument from local chainsaw carver David Roy. Back in May of 2007, Roy won a competition to create the replacement for an earlier totem, which had fallen victim to the destructive tendencies of bugs and birds. The budget was $14,000 and Roy set to work with enthusiasm and optimism. Estimated time of arrival? Halloween, 2007. 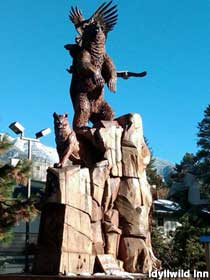 On November 23, 2010—about three and half years later—the still unfinished (yet impressive) 20-foot-tall landmark was finally moved via flat-bed truck to its permanent home in the center of town. The proud pile-up of wild animals (including an eagle, bear, and mountain lion) still awaits more-than-a-few finishing touches, but for now it successfully serves  to attract scores of shutterbugs — which was the point, after all — and a commemorative postcard is in the works.

What took so long? Well, you can’t rush genius (especially when it’s holding a chainsaw). David Roy’s business website, Mantle Carvers, clearly contains the caveat “If you are not in a hurry…” and he means it. In the case of the Idyllwild project, Roy was particular in his choice of materials, finally settling on using three attached cedar trunks. Once he set to work a chippin’, his pace was…well…leisurely. For years the unfinished sculpture was parked in a vacant lot along Highway 243. It evolved at a snail’s pace, attracting curious onlookers as Chamber officials stewed. 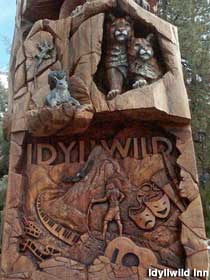 The semi-completed monument, titled “Harmony” (unintentional irony noted) became a point of contention in town. Some exasperated residents even considered bringing back original monument maker LaBenne (currently living in Wisconsin) so that he could triumphantly return to town and quickly whip up an encore effort.

But tempers seem to have calmed since the wildlife-laden wonder took up residence on Village Center Drive. Roy promises to carve an additional eagle which will be mounted on a pole to create a lower altitude photo op (timeline to come). And on January 17th, the Chamber of Commerce gave him an honorary membership. If a hodgepodge of delicately detailed carved creatures can live in aesthetic harmony, perhaps the humans in town can now coexist in peace.

54300 Village Center Dr., Idyllwild, CA
Directions:
Downtown, just east of Hwy 243. Turn at the Shell station onto Ridge View Drive, then to Village Center Drive. The monument is outside the Idyllwild Inn, next to the Idyll Awhile Bistro and across from Jo-An's Restaurant and Bar.