When Mt. St. Helens erupted on May 18, 1980, it obliterated nearly everything within a 10-mile radius — except for cameraman Dave Crockett and his KOMO TV news car. 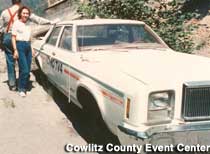 Crockett had secretly borrowed the car and drove to the volcano, even though reporters had been warned to stay away. He had a hunch that something newsworthy would happen, and his hunch proved correct when the mountain blew up and buried everything in boulders, trees, and mud (including Bigfoot). Somehow, the tiny spot occupied by Crockett and his car escaped.

With the 30th anniversary of the eruption, people remembered the car. The ash-crusted white 1977 Mercury Monarch was still there — a survivor yet again. The restaurant owner sold it to Cowlitz County for a dollar, and now it’s been moved eight miles up the road to the Hoffstadt Bluffs Visitor Center, Toutle, WA, where it will be permanently displayed. According to the Longview Daily News, the car “already was proving to be a tourist attraction even as it was being unloaded.”

Directions:
At the Hoffstadt Bluffs Visitor Center. I-5 exit 49, then drive east on Hwy 504 for 26.5 miles. The Visitor Center will be on the right. Drive in at the entrance, drive past the Visitor Center to the back parking lot, and you'll see the car at the far end, up against the trees.
Hours:
Aug 2018: Car gone. (Call to verify)
Phone:
360-274-5200
Status:
Gone

One Response to “Volcano Car a Tourism Survivor”