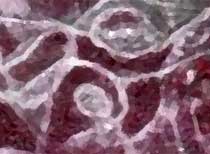 An article in the Charleston Daily Mail hints at current dissatisfaction with one of West Virginia’s more enigmatic attractions, “Water Monster’s Daughter” — a big rock covered with a mysterious carving, sometimes described as a deformed girl. Was it scratched by Indian shamans in the 1830s, or bored teenagers in the 1970s? The article claims that the rock “is in danger of deteriorating” and “once was a tourist attraction,” suggesting that the inscrutable boulder has fallen from favor.

The people of West Virginia need to take a time-out with their rock. Once you have a famous boulder that you can promote, you’re set; just look at crowd-pleasers such as Plymouth Rock — or even Tufa Rock. Don’t be so quick to disparage Water Monster’s Daughter, West Virginia. A rock with a name like that should have a catalog of branded souvenirs and a laser light show, not the back of your hand.

Sections: Attraction News Comments Off on Has Water Monster’s Daughter Fallen From Grace?