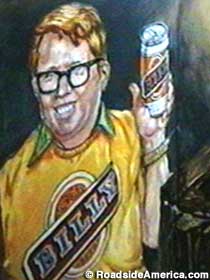 A brief story in today’s Fort Mill Times announces the opening of the Billy Carter Service Station Museum in Plains, Georgia. Billy was the colorful kid brother of President Jimmy Carter. He would sit in a lawn chair outside of his gas station, usually with a beer in hand, voicing opinions about everything from the Middle East to Welfare. A special brand of Billy Beer was brewed and marketed, endorsed by the President’s bro. All this was extremely unhelpful to Jimmy, whose failure to get reelected in 1980 returned Billy to obscurity.

The old gas station became B.J.’s Pitt Stop after Billy died in 1988 — so it’s nice to see that it’s been restored to its disco-era glory. The article notes that the Museum represents “two years of planning and eight months of rummaging” but gives few other details.