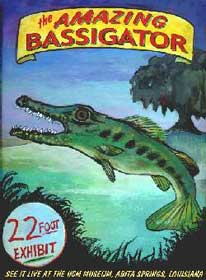 Nothing is known of the genealogy or habits of this predator-seafood entree hybrid. An encounter with it in the wild would probably be short and unpleasant. Half-alligator, half-bass, 22 feet long, with eyes the size of beach balls, it must be a merciless and voracious hunter in its native habitat.

The only known example of the Bassigator is mounted on a boat trailer behind the UCM Museum in Abita Springs, Louisiana, protected from the elements under an open-sided shed. According to the Museum's curator, John Preble, the creature is dormant but still alive. Curious visitors are advised not to stand too close to its powerful, toothy jaws.

The creature has been dubbed "Buford the Bassigator" by Mr. Preble. Nearby stands another, smaller monster, a half-alligator, half-terrier named "Darrel the Dogigator." But it looks fake.

What's Out There for Vacation Travelers?
The Bassigator can be seen at the UCM Museum -- a unique triple-monster attraction that also exhibits a Fiji Mermaid, and a cast of a three-toed footprint of the Honey Island Swamp Monster, close relative of the Boggy Creek Monster.