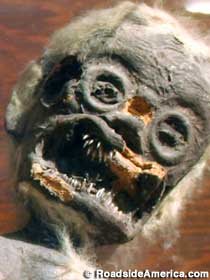 "Mermen" are half-humanoid/half-fish (or /half-reptile) monstrosities that are star exhibits at whatever roadside attraction is lucky enough to possess one. Known variously, depending on the arrangement of body parts, as Merman, Alligator Man, and Feejee (or Fiji) Mermaid, they range from baby-sized mini-monsters up to ten-foot-long crocodilian nightmares.

The specimens that we've seen appear to have all been stuffed long ago, and are usually displayed behind dusty glass. They reportedly hail from Fiji or off the coast of Hong Kong, so the climate here must not have agreed with them.

The Merman appeared in sideshow tents and on county fair midways long before the days of P.T. Barnum, although he is credited with making the creature a sensation.

Its moment of stardom was brief, however, and Mermen nowadays have disappeared from the exhibit halls of museums where they previously were showcased. The creature now finds itself back where it began, in out-of-the-way collections that aren't afraid to display something that rocks the foundations of zoology and biophysics.

Special Powers:
Difficult to say, given the lack of live specimens, although you wouldn't want to get within striking distance of a Merman's claw-tipped hands and ripsaw teeth.

Other Mermen of note include: