But it’s not officially art, either.

Three judges from the civil appellate division of the Hillsborough circuit court have ruled that Airstream Ranch can stay, overturning a 2008 decision by the county Code Enforcement Board that ordered it to be taken down. 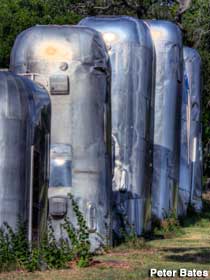 Frank Bates, the man who buried the eight old Airstreams nose-down in the ground along Interstate 4, explained the ruling to us. “They said it wasn’t junk, and it wasn’t a sign, and it wasn’t illegal storage of RVs,” Frank said. “But nobody wants to commit that it’s art!”

That last point exasperates Frank, who has wanted acknowledgment all along that Airstream Ranch is as much a work of art as Cadillac Ranch in Texas. “At first they said, ‘If you can prove it’s art, we won’t bother it,'” Frank recalled. “I even showed them a book on modern art that had Cadillac Ranch in it!” In the end, however, the judges apparently decided that Airstream Ranch had enough going for it so that they could bypass the hot potato decision of what is or isn’t art.

Slightly disappointed, Frank nevertheless is delighted that Airstream Ranch can stay. “We’re gonna put spotlights on it, because they’re all silver and people can see it at night,” he told us. “We spent about a thousand bucks planting big, beautiful flowers around it, but the sun beating on those silver Airstreams fried ’em all. We’re gonna have to put cactus out there.”

Frank said that over 10,000 people have stopped by his RV dealership to sign a petition supporting Airstream Ranch, and that people are still signing it even though he doesn’t need any more signatures. “It makes ’em feel good,” he said. “And it’s kinda nice, once in a while, to win.”